Teenage Mutant Ninja Turtles: Mutants in Manhattan is about fun: simplistic character traits, colorful characters, comical antics, and no significant weight behind the story. You can replay any level, raise the difficulty, or connect with some folks online for multiplayer action. All of these options are available to you from the start and add a sense of instant gratification. 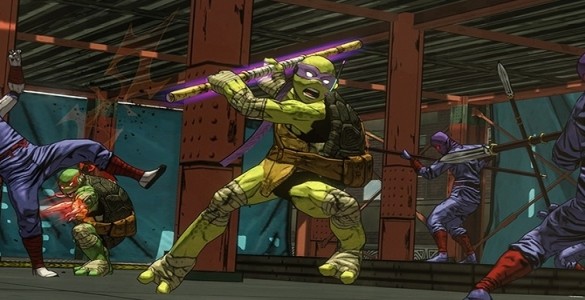 The story is very straightforward. The Turtles spend the game trying to keep Manhattan safe from the combined efforts of Krang and Shredder. It is not clear what the villains are up to at the beginning of the game, but as the Turtles continue to thwart their efforts, their evil plans become clearer.

You have to ask yourself some questions though. Is this adventure worth your time? Are these turtles a beloved rendition of your favorite teenage team, or just another reminder of a Michael Bay monstrosity?

First thing is first: I love the look of this game. The cell shaded style may not be new to video games, but it is new to TMNT, and it was a pleasant take on the comic book style. The Turtles were bright and boastful, while enemies like Bebop and Rocksteady were successfully recreated as exaggeratedly burly and powerful, while not feeling too menacing.
The gameplay was what was to be expected from a Turtles game: a repetitive action beat-em-up. You’ll go up against many familiar faces like hordes of foot clan, rock soldiers, and Krangs. There is even some exciting boss battles against some of the series’ favorite villains.  While in combat, there are fast and strong attacks, as well as various ways to combo those moves. There is also a dodge mechanic that includes a parry ability, but the parry is difficult to time correctly. I also want to make sure to call out the traversal in this game, which is very smooth. Climb walls, grind rails or float from building to building with your para-shell. Getting around the semi open world levels never got in the way, and honestly felt better than most open-world traversal has in other games of that genre. You never felt limited to only one or two paths to a destination.
Separate from the basic commands, the Turtles a have the ability to unlock new special moves that are on cooldowns.(Editor’s Note: Cooldowns, in games, are a period of time between which a special move cannot be used. This is often used for balance purposes and to force players to use diverse moves.)  These moves can be used by any of the four Turtles. Upgrading one skill would improve it for all the Turtles. It was a little disappointing that there were not skills specific for each of them, but the included abilities led to some exciting moments.
There have been some conversations post launch about the fact there there is no local split-screen co-op. This was a staple of turtle games for some time,  so I can understand why it is frustrating. I do wish to point out, though, that most Platinum developed games are normally single player experiences. I connected to a handful of multiplayer games and work with strangers to rid the city of vermin, and I found that to be an entertaining experience.

Rated T for Teen
Description:”This is an action game in which players assume the roles of the Teenage Mutant Ninja Turtles as they fight to defend New York from villains. From a third-person perspective, players traverse an urban landscape and battle soldiers, aliens, and various mutant boss characters. The turtles use swords, staffs, punches, and kicks to defeat enemies in frenetic combat. Some characters use blaster-like guns; one boss uses a chainsaw and blaster; a soldier uses electrified prods to attack the turtles. Combat is fast-paced, with frequent explosions, laser/gun-fire, combo moves, and grunts/cries of pain.” ~ ESRB

Overall, I found the combat in Teenage Mutant Ninja Turtles: Mutants in Manhattan to be enjoyable, and deep enough to warrant replaying levels to improve my score and my timing with combos. I found the style to be very fitting for the turtles, and the story to be a perfectly ridiculous. Even after beating the game, I will continue to go back to replay my favorite levels so I can spend a little more quality time with Leo, Raph, Mikey and Donny.
~ Stephen Haberman The Geeky Husband on Twitter
andriol testocaps
Xbox onePS3PC gamingXbox 360ReviewPS4
0 comment
0
FacebookTwitterPinterestRedditEmail

An Expert Weighs In On Eidos Montreal’s Augmented Future