The Adventure Pals from Armor Games is an absurd jaunt through a bizarre world where almost nothing makes sense. Turtles can do back flips. Whales complain about “hashtag body shaming.” The hero’s best friend, Sparkles the giraffe, can use his tongue like a propeller to slow their collective fall. The villain wants to turn everyone into hot dog monsters. Every single one of those sentences is true. And here’s one more: This game is just as fun as it is ridiculous.

The premise is simple. Your dad has been kidnapped by the maniacal villain Mr. B, and is at risk of being turned into a hot dog. You, Sparkles the giraffe, and Mr. Rock are his only hope. You need to travel through several diverse and colorful levels full of pirates, cowboys, and other (even weirder) oddities in order to save him. Each new zone has a series of quests that will have you exploring complex platforming levels in search of rubies, cupcakes, and other treasures. 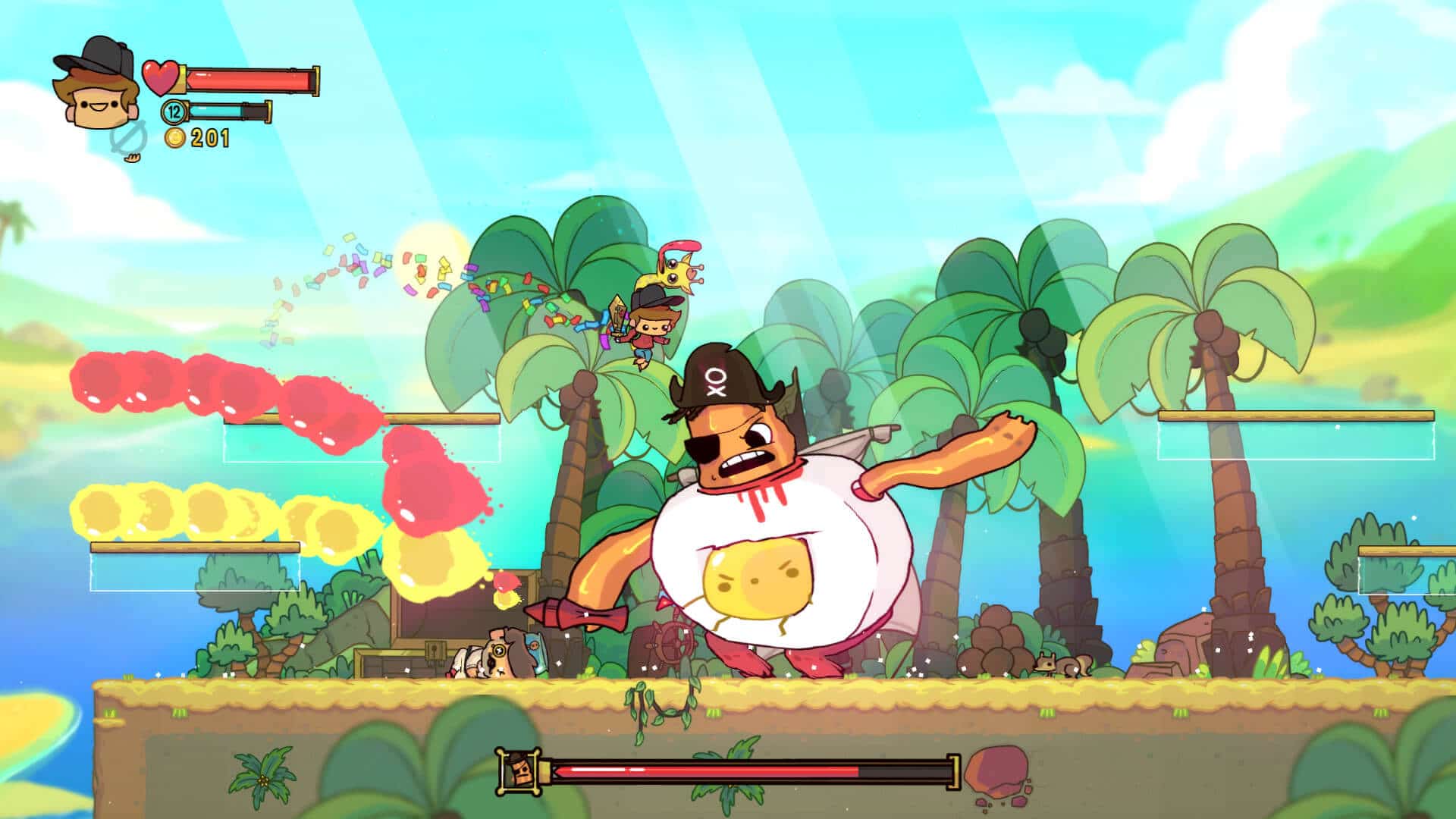 No. Seriously. This pirate is made out of bacon and eggs.

The Adventure Pals may be absurd, but that doesn’t mean it is simple. Eventually you will find yourself wall jumping up a passageway, then hovering with Sparkle’s tongue as you attempt to float closer to an element that you can grapple from, only to ride a zipline afterwards. It can be difficult to chain all of these different moves together, and there are no checkpoints to speak of. I would have quit in frustration if the game didn’t go out of its way to help me. The platforming in The Adventure Pals is forgiving thanks to snappy controls, easily timed wall jumping, and a mechanic that lets you mantle up onto a platform if you mistime a jump. This compensates for some devilishly challenging platforming sections as you progress through the games 105 levels. The mantling mechanic alone saved me dozens of times.

This isn’t just a simple platformer either. The Adventure Pals features a leveling system that lets you choose from up to three different perks each time you gain a level. This added a sense of progression and drove me to defeat every enemy I could find in search of blue experience orbs. The perks were varied and all of them felt useful. I loved the ability to improve my inventory size early. But, I was able to unlock pretty exotic perks later on in the game.

No one needs to play The Adventure Pals alone either. The game features drop-in/drop-out cooperative play. This is a great feature for families that have kids who just can’t make up their minds what they want to play.

Is this a kid friendly game? 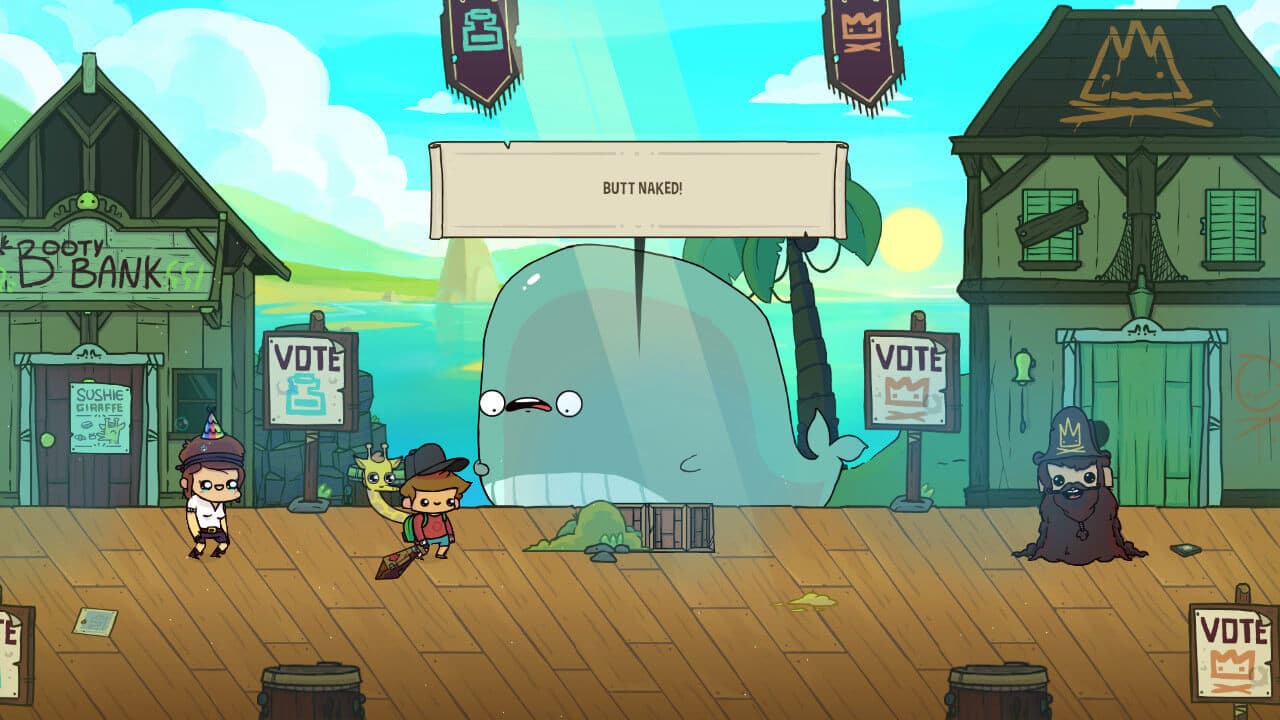 The Adventure Pals is rated E 10+ by the ESRB for Fantasy Violence and Crude Humor. It is also rated PEGI 7 by the Pan European Game Information organization.

The Fantasy Violence is negligible in this game. You run around fighting hot dog monsters and oddly shaped blobs with a wooden sword. This will not be an issue for the vast majority of parents.

The Crude Humor is where some folks might have concerns. I played through the game and found it to be on par with the humor found in most cartoons on Cartoon Network, or with older Nickelodeon cartoons like Ren and Stimpy. This isn’t intellectual humor here folks. We’re talking fart jokes and bosses made up of literal bacon and eggs.

Can Kids play it?

The Adventure Pals is a challenging game. Inexperienced gamers won’t be sprinting through this one. As I said above, though, the game’s mechanics are forgiving enough to keep it from getting frustrating. Youngsters looking for a challenging platformer after finishing Super Mario Odyssey will be very happy with this one.

Most of the story is delivered through text so I don’t recommend this game for early readers unless they have a helper nearby. The iconography is ok, but it is still pretty hard to follow what’s going on without being able to reason what is going on.

I loved this game and I think that it is worthy purchase for families looking for a smaller game to play. It will launch on Xbox One, PS4, PC/Mac, and Switch on April 3rd.