Skylanders was responsible for the birth of the toys to life genre. Kids everywhere asked their parents, Santa, or anyone else who might listen to help them get in on the action. There were six games in the series  and dozens of figures.

It can be VERY difficult to tell them apart. This is especially true now that the figures are no longer sold in stores. The only way to find the characters now is to search at rummage sales, on Ebay, or on the Facebook marketplace.

Fear not! We have a quick and easy guide to figuring out how to tell all of those Skylanders apart and to figure out what games in the franchise you can use them in.

If the figures are in their original packaging for some reason, then your job is easy. You can read the box and find out what game it goes with. You can use that figure with all of the Skylander’s games released afterwards.

The Skylanders release timeline is as follows:

Unfortunately, most of the Skylanders you find today will be loose. So you’ll need to find another method to identify them.

The good news is that all you have to do is turn the figure over and look at the either the color of the translucent base or its shape! That detail will give you everything you need to know to figure out where it came from.

Here is a handy chart to help you figure out which games a given figure can be used in: 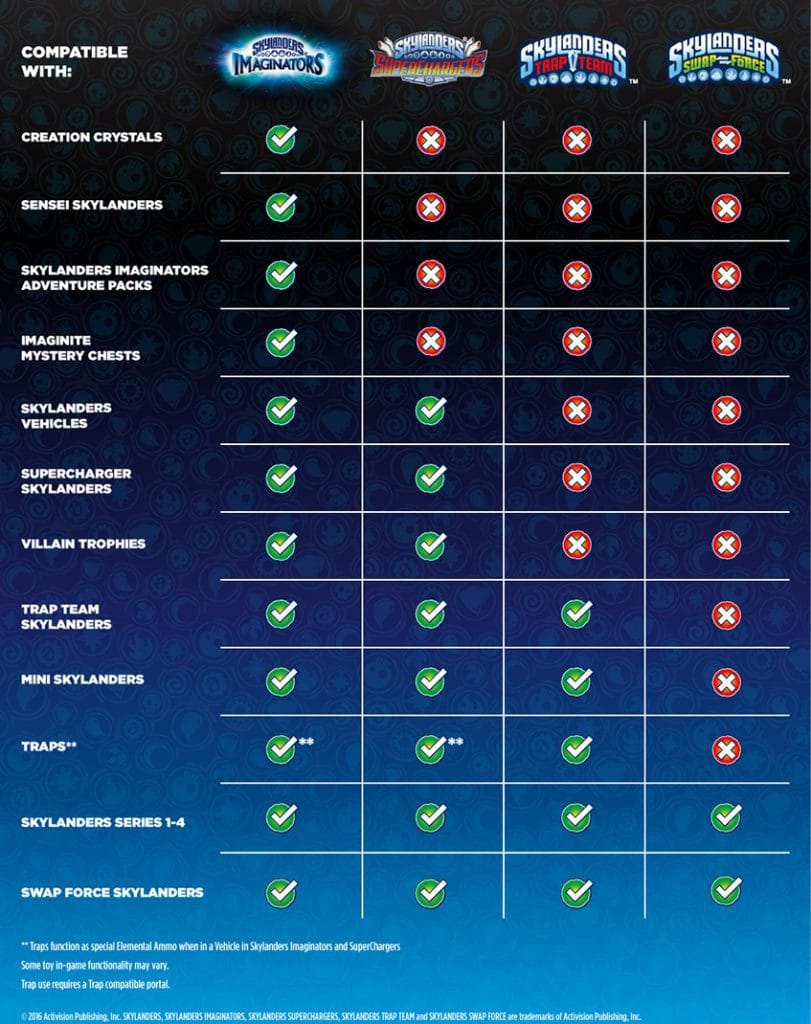 Another key characteristic of different Skylanders is their elemental type.  You can find that by looking at the symbol on their base.

The different elemental types are:

Skylanders Giants featured a new kind of figure that was between two and three times the size of regular figures. These characters are used in the game to do things you would expect giants to do like pull floating islands on giant chains and break down walls.

Skylanders: Swap Force brings in larger characters that disconnect with magnets at the waist. Their legs each have powers that help unlock new areas. The different movement powers associated with the different members of the Swap Force are listed below: 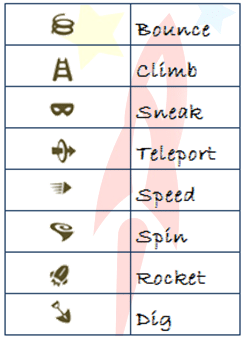 Skylanders Trap Team features special characters are also larger than the common Skylanders and have a translucent weapon or headwear.

One of the other key components to Skylanders Trap Team is the ability to trap boss characters and use them as characters in the game. There are traps for each element including a trap to help capture Kaos (the final boss) himself!

It is worth mentioning that you only need a land Supercharger to complete the game, but it is a good idea to pick up and Air and Sea vehicle so that you don’t miss any content.

Traps from Trap Team work with the Superchargers game, but you can’t play as the characters. Instead they provide powerful elemental ammunition for Supercharger vehicles.

Activision also worked with Nintendo to create a pair of Skylander characters that are ALSO amiibo. All you need to do to switch between the two is to rotate the base. The Skylander/amiibo characters are Donkey Kong and Bowser. They even come with their own vehicles (Donkey Kong has a barrel themed racer and Bowser has a plane.)

Skylanders Imaginators is the last game in the series. The gimmick for this game is that instead of a large line of new Skylanders figures they released creation crystals for each element. You then use those creation crystals in the game to create custom Skylanders using one of 10 different battle classes. You then customize them with items that you can either find in the game or purchase separately in blind packs.

There are also 31 Sensei figures to purchase. Each of them provides a new power move for your custom Imaginators character depending on their class. 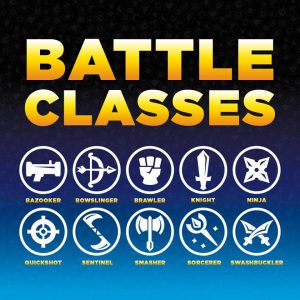 The 10 different battle classes are:

Hopefully, this guide will help you to understand what Skylanders you are getting!