Kirby is an adorable cooperative action game for the Nintendo Switch. Kirby has been a reliable member of the Nintendo family since the original Nintendo Entertainment System. This game will takes full advantage of the local multiplayer features of the Switch and integrates them into the game’s core play.

In addition to Kirby being able to suck in enemies to absorb their powers, Kirby can now recruit enemies with the power of friendship and turn them into allies. These allies not only allow Kirby to create combination abilities, but they can be controlled by up to three other players. They can also left as computer controlled cohorts. Game play features high amounts of whimsy to go with the action, with power ups that include a “Cleaning” Kirby who sweeps away foes with a straw broom, and a “Stone” Kirby who turns into a Curling Stone sliding down hills. Kirby is going to make a solid family friendly title to the 2018 Nintendo Lineup.

Kirby has always been a game that is easy enough to pick up for younger audiences, but contains enough hidden prizes and secret paths throughout the level to challenge more experienced players. Its use of local multiplayer for the Switch means that the parent or older child can play Kirby while less experienced gamers can flop about as his recruited cohorts. This accessibility is integrated into the core game play of the game, and the differences in play experience between different ages is compensated for by the design of the game itself. Its level of whimsy and adorably animated cast will make Kirby a strong purchase for family gamers with younger kids who want to play. We look forward to more details from this game in 2018.

Forza Motorsport 7 was officially announced during the Microsoft press briefing. The Motorsports series alternates with the Forza Horizon games so this wasn’t much of a surprise. It was great to see the game looking fantastic running in 4K resolution thanks to the newly announced Xbox One X.

Forza Motorsport 7 is the most recent iteration in a long time of realistic driving and racing simulators for the Xbox franchise. Forza 7 draws the actual tracks and race cars from around the world and renders them with near photorealistic realism. While this series is often held as an example of the Xbox’s high graphic power throughout the ages, the series is considered one of the best realistic racing games ever, and holds that title with sequel after successful sequel.

Why is this Awesome?

This is the just about the closest a family gamer is going to get to a realistic racing experience outside of setting foot inside a race car. If that is an experience that you or your younger family gamers enjoy, then this will let you sink deep into the experience. Previous Forza titles have let you do deep under the hood and allow for extensive customization, and I expect Forza 7 to be no different.

Cuphead was announced at a Microsoft press conference a few years ago to great fanfare. Unfortunately it has been plagued by delays and still hasn’t been released. Fortunately, the developer has finally revealed the release date on Xbox One and PC to be September 29th.

Cuphead is an action game with animation mimicking the art style of animated movies from the early 1930’s, except rendered in real time using modern technology. This two player cooperative game features the titular Cuphead and best pal Mugman fighting through thirty excruciatingly hard boss battles with shooter controls similar to classic Nintendo games. Every piece of artwork in this game feels like it has been peeled from the movie theater, with intentional blurryness and color issues as if the game was being played by a movie projector that keeps drifting in and out of focus.

Cuphead is a game that is meant to be a spectacle, an ultra hard shoot ’em up that can be watched by others. With the violence muted to very low levels by the animation, this game is a clear example of a game where parents can play and kids can watch. It also serves the market of young gamers who have grown up around simpler action titles and want more difficulty, but without explicit gore.

Square Enix to Release Star Ocean: Till the End of Time Digitally for the PS4

Star Ocean: Till the End of Time is being released as a digital exclusive for the PS4 on May 23rd. This game is part of a long running RPG series with a blend of Sci-Fi and Fantasy themes wrapped around an action based combat system. This game is rated T for Teen for animated blood and some mild violence but is otherwise family friendly to play around younger gamers. This is about as intense as most Avengers or Star Wars movies for sake of comparison.

Star Ocean: Till the End of Time was an RPG where you could get very deep into the weeds with crafting mechanics and mini games, but the combat system features three computer controlled characters while you controlled a character with two buttons that can be assigned various attacks for a simple and fun experience. 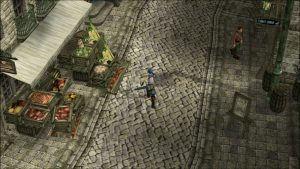 Star Ocean: Till the End of Time is a game a remember well even though it came out more well more than a decade ago. Laser aiming devices and shotgun blasts were used alongside magical dimension doors. Space ship captains fought side by side with court wizards and quirky animal sidekicks. This game takes an escalating story that spans galaxies and adds a final mid game twist that redefined the perspective of the entire series before and after it. 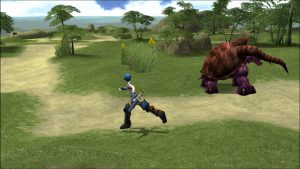 Square Enix is adding additional features to Star Ocean: Till the End of Time like adding trophy support, the ability to share screenshots and video, along with remote play. A word of caution to trophy seekers is that this game has some optional content that is incredibly difficult and will either having you pull out your hair or pull out a game guide. Expect some cameos and references from other Tri-Ace/Square Enix titles in the deeper parts of the game as reward for those willing to complete the grind.

What do you think? Is this a game you’ll