Top Posts
Gaming Definition of the Week: Analysis Paralysis
Tips for Playing Dungeons and Dragons with Kids!
How to Play “Frustration” – an EFG Family...
Great Games to Make You Laugh
Raising a Chess Prodigy: Tips and Tricks for...
EFG Essentials: Great Board Games for Kids
8 Games From Essen Spiel 2022 That We’re...
11 Board Games That Help Teach History!
Family Board Game Review: Fyra
Tips for Completing Jigsaw Puzzles
Home » Board Game Review: Splendor
Board Games

Splendor is a simple and elegant set collection game for two to four players. This is a game that is easy to teach, quick to learn, and will take a long time to master. The bottom line here; Asmodee has a huge hit on their hands as this has become one of our family’s favorite games.

In Splendor, players take on the role of Renaissance jewelers who are working to build their prestige and attract the attention of wealthy noble patrons. They do this by gathering resource tokens and spending them on development cards that represent new designs, tools, mining operations, and store fronts. The game is essentially a race to fifteen prestige points.

Gameplay is straightforward. Players take turns either taking different colored tokens or using them to purchase development cards. These development cards each have a colored “bonus” that gives their owner tokens to use for future purchases. As a result, these developments build on each other as the game develops. They key is that all of these resources are limited. Players have to watch what other players are doing and adapt their plans accordingly. 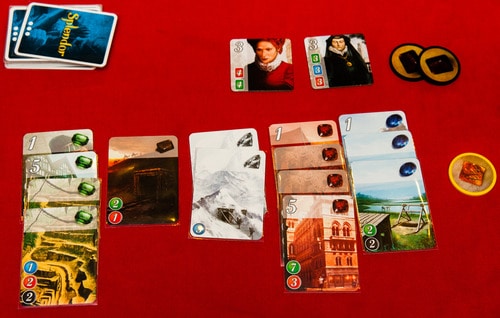 With all of that said, our favorite part of the game has to be the components. The entire game revolves around collecting gemstones which are represented by wonderfully solid tokens. There aren’t many components to the game so it is easy to see where the designers wanted to spend their money. They could have used cardboard chits or cheap poker chips, but the tokens they chose have real weight to them and make a very satisfying sound when placed down on a table.

Games are quick and usually take around thirty minutes to play. Things definitely speed up with fewer players, but it is definitely worth the extra time to play with the full compliment of four players. This guarantees that there will be competition for resources since there are so many players.

Splendor has an MSRP of $39.99(although it is often a bit less costly on Amazon) and it is worth every penny. You will get a lot of play out of this game and the solid components will not be damaged over time. Buy this game with confidence!

Board Game Review: StartUp: A Business Game For All Ages

[…] I have two.   My absolute favorite game to play with family is Splendor (Check out their review of Splendor). I love how quick it is to teach, and I love the components. Those chips feel so great! (I’m […]