Lots of people dream about becoming a superhero; I know I have. But, sadly, I do not have super strength, the ability to climb walls, or to call upon the forces of mother nature. I do, however, know how to roll dice! If you are like me and you love comics, playing games, and have dreamt of becoming or superhero or maybe even being the maniacal super-villain, then Marvel Dice Masters: Avengers vs. X-Men by Wizkids is the game for you. 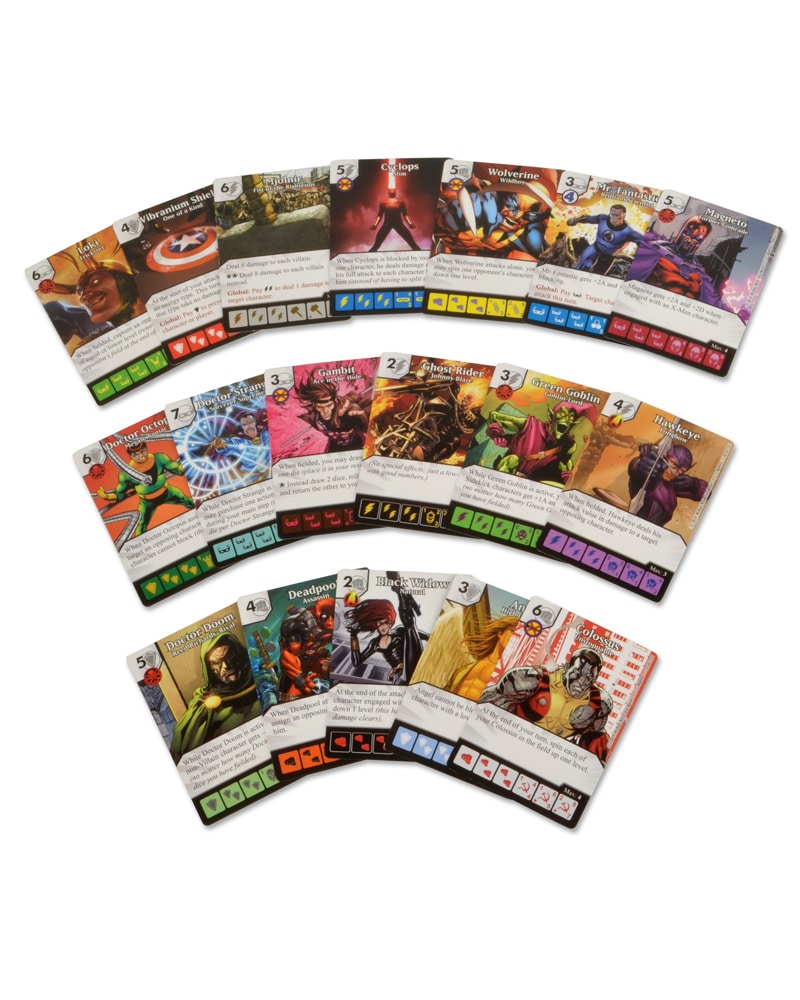 You will be able to find everything you need for a two player game at your friendly local gaming store. The Dice Masters set-up box, which is much like the box for Quarriors, comes with enough basic dice for one player, four boosters, and a special alternate art Storm character card. And then there are the gravity feeds full of boosters that contain 2 character cards and the dice that match them.

You are going to want to begin with a Starter Box; let me break down the contents for you.

Each of the sidekick dice have six different symbols (mask, fist, lightning bolt, question mark, shield, and a sidekick). Five of those sides are used as energy to purchase character cards while the sidekick side of the dice can be fielded as a separate character during combat.

Your objective during each game is to deplete your opponents health points from 20 to 0. It needs to be noted that this is no mere dice rolling game! It is also a deck builder. You can set up some wonderful combos with many of the cards that are available. Nick Fury, for example, lets you field Avengers for free so it is a good strategy to pair him with those heroes. 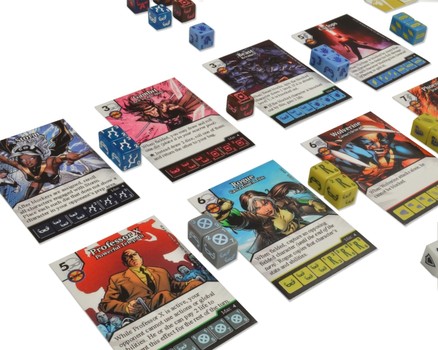 In a casual game of Marvel Dice Masters: Avengers vs. X-Men you take control of up to eight character cards (heroes & villains alike), two basic action cards, and up to 20-dice split amongst the character cards. At the start of each round you roll four sidekick dice from your dice bag. Then you spend your dice as energy to purchase character or basic action cards. Each character will have a main energy symbol. Storm for example has the lightning bolt as her symbol so you must spend one lightning bolt plus the sum of the other dice that equal the cost next to her symbol to purchase her.

Chris and Aaron are getting ready to play Marvel Dice Masters: Avengers vs. X-Men. Chris has a six character team set up. While Aaron is using a seven character team. Each player is using 15 dice. First, they check to see which of their teams consists of the highest total of points used to field their characters. Chris ends up with the highest total so he decides who plays first. In our example he decides to play first.

Chris then removes 4 dice from his dice bag and rolls them. He comes up with two lightning energy, a fist, and a sidekick. He uses the fist and a lightning energy to purchase a “Black Widow: Natural” from his character area and places the die in his used area. He then fields the sidekick die for free. At this point has the option to attack or leave it fielded for later use.

Aaron then rolls his own four dice and rolls a shield, a fist, a mask, and a question mark. He spends the mask, fist, and shield to purchase “Gambit.” He decides to keep the question mark for later use as it is a wild card and can be used as any of the other energies. He has nothing to field so he ends his turn.

A few turns later Chris has no dice left in his bag so he takes all of his used dice and refills the dice bag. He takes out another four and rolls. One is the Black Widow die that he purchased on his first turn. He rolls the level 1 side which has a fielding cost of 0. He fields it then uses the fist and shield he rolled to purchase a Nick Fury keeping the question mark that is left over.

Chris attacks with Black Widow and his sidekick. Aaron has nothing to block with so the attack goes through. 3-points of damage is done to Aaron. Since Black Widow and the sidekick attacked without being blocked they go to the used area.

It goes without saying that the game is complex, but once players have mastered the basics they will be able to expand into some of the more complex strategies. Dice Masters, like Magic: The Gathering, is a game that grows with both the player and their collection of cards and dice.

Want to get in on a tournament? Visit your friendly local game store and see if any are scheduled. When you play in an authorized tournament you are guaranteed at least a participation prize.

Dice Masters is another game that is built around collectibility. This game alone has turned Wizkids into the largest producer of dice in the world. The next set, Marvel Dice Masters: Avengers vs. X-Men, released on October 22nd.

In the near future Wizkids will also produce more sets to go along with the Dice Masters theme. Some of the set themes that have been announced are Dungeon & Dragons, Yu-Gi-Oh!, and DC Comics. I look forward to mixing things up with these sets. I can just imagine a team with Superman, Spider-Man, a Kobold, a goblin, Dark Magician, Batman, Wolverine, & Blue-Eyes White Dragon.

Drop me a note on Twitter @Boardgaming_FTW or Board Game Geek: Anime_Guru. I’d like to hear your card combos if you play or even if you have any questions.