Most fire fighting games are cooperative, but in the game Fire Tower, you compete with other players to protect your fire tower from the fire and spread the fire to your opponent’s tower. There are components of hand management and area control incorporated into the game. Fire Tower is for 2-4 player ages 13 and up. Game play takes approximately 15-30 minutes.

Smoke rises on the horizon. A fire rages somewhere in the heart of the forest. From the height of a fire tower, you command the efforts to defend your tower and take down your opponents. With each turn, the inferno grows. Harness the power of the wind to push the blaze towards the other towers, clear tracts of land to fortify your tower, hinder the plans of your opponents with torrents of water, and unleash an arsenal of fire cards upon your foes. Each card has a unique pattern with its own tactical advantage. You must effectively direct the resources in your hand and use sound spatial planning to deploy them. 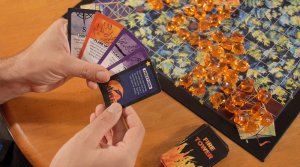 First, each player receives one bucket card, which is kept face up.  Next, 5 cards are dealt to each player as their starting hand, and finally the weather vane die is rolled to determine wind direction.

At the beginning of each players turn they must add one fire token in the direction indicated on the weather vane die.  The fire token must be adjacent to an existing fire token or the eternal flame. The fire occupying four squares in the center represents the eternal flame. The second portion of their turn each player can either play a card and draw a new one or discard as many as they want and redraw to 5 without taking any actions.  This option comes in handy when there are no viable options in your hand.

Player can take  a range of actions depending on the card they play. There are Fire cards that spread the fire regardless of wind direction.  Water cards put out the fire in a small area. Fire Break cards create areas the fire is unable to burn, but may not be added to adjacent spots with a Fire Break.  One exception is that they may be placed diagonally to an existing Fire Break.

Players are working to defend their Fire Tower, the nine squares in the corner of the board, and to breach their opponents. In the Fire Tower squares fire can spread, but water and fire breaks can not be used. This is where the bucket card comes into play.  Players can use it once per turn to extinguish 3 fire tokens in a row, as long as one is within the tower. Once fire reaches the orange square in the corner that player is eliminated.

Eliminated players give their cards to the player that eliminated them. That player adds the cards to their hand, and discards down to six cards. All remaining players in the game add a card to their hand.  The eliminated player rolls the weathervane die to exact their “revenge” and causes a Firestorm. A Firestorm add one fire token in the wind direction to all existing fire. There is also one card which causes the same effect. Play continues and if there is another elimination the hand size increases to seven. The last player without a burned Fire Tower wins.

Fire Tower is enjoyable and accessible. I think that players far younger than the recommended age can have fun with this. The rules and game play are easy to learn and the game play is intuitive.

Fire Tower has core mechanics that are easy to grasp by younger players and novice gamers.  Additionally, it also incorporates a depth of strategy which veteran players can find engaging.  The variety of mechanics and strategy makes this game a good choice for mixed ages and various skill levels.

The theme, while about a spreading forest fire and burning a Fire Tower, is not graphic.  If anything the more the board fills with fire tokens the prettier it gets.  The cards incorporate a description and a grid representation of the effect making them easy to understand.  This is another great way the game scales down to both younger and less experienced gamers.

Fire Tower is a awesome addition to any family game collection.  Buy Fire Tower on Amazon!