Every time I think Nintendo is going to act predictably I end up looking foolish. They announced this morning that they would be posting a new video tonight that would demonstrate a new “interactive experience” that was “specially crafted” for kids. I assumed that they were just talking about a game. I like to give myself partial credit, so I’ll give myself 1/10th of a point.

Nintendo showed a new video announcing Labo. This is a bizarre line of DIY cardboard kits that let kids (or adults) build attachments for their Joy-Cons and play various mini-games. On a high level, Labo works by providing a set of pre-cut cardboard sheets that you punch out, fold, and connect in order to build different attachments called Toy-Cons (ADORABLE name btw). Once the Toy-Cons are built you can use them to play a set of mini-games either on the Switch Tablet or using the Switch tablet as a controller. There will be two Toy-Con sets at launch on April 20th, 2018, but I am certain that more will be launched over the course of the year.

Labo is a STEM toy at its core and represents a huge shift for Nintendo. When the Switch launched last year Nintendo focused on games that appeal to the standard gaming audience. They did a great job releasing The Legend of Zelda: Breath of the Wild and Super Mario Odyssey in one year. But, they definitely played it safe. Labo is different. This brings Nintendo back to where they were with the Wii. They are releasing a product whose core attraction isn’t a traditional game. Instead, Labo focuses on three core experiences.

The experience of punching the cardboard sheets and following on-screen instructions on the Nintendo Switch tablet evokes the same feeling as building a complex LEGO set. Reports from around the web on places like The Verge are telling us that some of the sets can be completed in as little as 15 minutes, but will be best when done by a parent and child working together. This kind of social experience is something that was missing during Link’s solitary adventure last year.

I never would have expected Nintendo to try and capitalize on the growing maker movement among families and in educational circles now, but this is a great way to do it. Our kids are already excited about it and they’ve only seen a 2 minute long promo video.

It wouldn’t really be a Nintendo product if it didn’t include a game. Each of the Toy-Con sets includes a cartridge full of mini-games and other software that will help kids play with their newly built creations. We don’t know many details yet, but I am super hungry to play the robot game if for nothing else because that robot can transform into a car!

Once kids have built their Toy-Con Accessories, and played their mini-games, they can then use the Discover mode to get information about how the Toy-Cons work. For example, the piano works by using the Joy-Con’s camera. When you plug the Joy-Con into the back of the box it can see the cardboard pieces moving when you press the keys. The software translates that movement into song! This learning component is something that is a perfect fit, too. The market has been flooded in recent years by toys and games that let kids figure out their inner workings, but none of them have the polish of a Nintendo game. This has the chance to be something special.

I will admit that I am very excited to see the Piano included in this set. It reminds me of when Nintendo packaged the music maker alongside the Mario Paint game for SNES. This Piano is going to see a LOT of use. I can’t want to see the cool YouTube videos that kids will create with it. 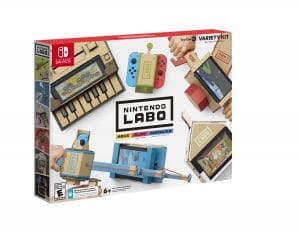 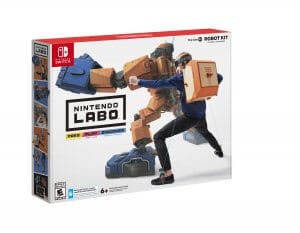 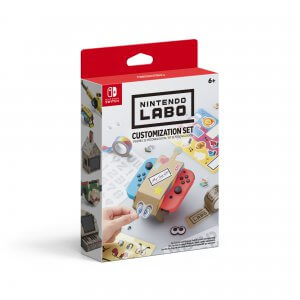 Nintendo Labo will be launching on April 20th, 2018 and we can’t be more excited for it. Is this something that your family will be picking up? Sound off in the comments!

Celebrate a Year of Legendary Pokémon in 2018!